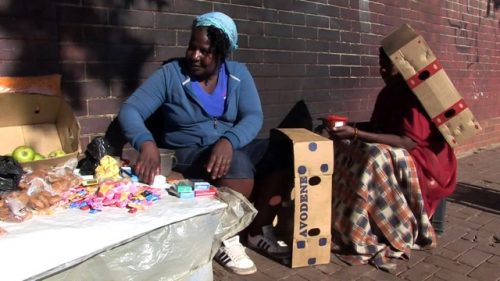 In the affluent West, street trade has practically disappeared. Everywhere else, newcomers and old-timers are trying to earn a living within a few square meters.

Perhaps the origin of human civilisation is found on the streets, with the vendors who drive their trade under any circumstances. Of course, there are older professions: hunter, fisherman, farmer, weaver. But with trade began the interaction between people; the exchange of products and services and, in their extension, of news, knowledge and ideas.
The city too finds its origin in street trade. All it takes to grow a city is a road and an obstacle, which can be a river, sea or massif. The bottom line is that people have to wait there, as waiting people attract trade, and trade attracts people. Sometimes a road obstacle grows into a city of millions.

In the affluent West, street trade has practically disappeared. Everywhere else, newcomers and old-timers are trying to earn a living within a few square meters. The lucky ones have a tin shed or another place to store their ware covered in plastic and tied up with ropes. However, most have to install their table, party tent, shelf, refrigerator, plastic crates, groundsheet, armchair, clothes rack, banana boxes, mobile display case, scale, flower buckets, typewriter, or mobile fairground attraction only to break it down again in the evening. Others go around with a backpack, transport bicycle, wheelbarrow, children’s bicycle, cargo moped, shopping cart, violin case or filled plastic bags.
Street trading seems mobile and flexible, but that is just appearance. Especially when you depend on the street, it is essential to have a regular spot. Customers need to know they can find you on that corner, against that fence, under that tree, or on that ledge. Therefore, the mobile vendors have fixed routes along fixed locations too.
These locations are ambiguous; they belong to public space, yet at the same time they are partly privatised. Residents and sellers know who is where, and woe to those who steal someone else’s spot. Street vendors try to establish themselves: is it possible to leave things behind in the evening, claim an electricity house, or construct a small roof which, in time, takes on a firmer shape?
From the other side, residents and government are pushing back, demanding vendors to clean up waste, keep sidewalks clear and evenings quiet, and not to beg or deal. Sometimes whole streets are brutally evacuated, shattering a reputation of years.

Street vendors need to preserve a vulnerable balance. They are forced into diplomacy and consultation, to give and take. They form the theatre of the street, are the point of contact, intermediary and social lubricant. Precisely their subtle appropriation of open space makes it a public space, and thus a city.

Artist Su Tomesen made the video installation Street Vendors, which had its world première at September, 29th 2018 on the Netherlands Film Festival. This text is part of the leporello that was published on that occasion.